Gennaro’s Children, Underworld’s Children and now the Unintentional Aquanaut series are all infinite projects in time and space, but not the Emerald Scrolls: that’s an indefatigable pressing issue concerning deep antiquity.

Initially, the original idea was to write one book, (and that was that), but time moves on, and now the combined book’s structures are building ever larger with every futile rewrite.

Now I have a problem, in that they have taken over my life, and my precious wall(s). I’m also the:-

An example of Ivona’s Amy voice.

A Bit Long, But A Lot Has Happened.

Local News: My Dell slate XPS12 has died with the USB Ports failing, but the rest works fine. Now, I’ve had this thing for two years without fault, but on the day that my guarantee died: (it technically died as well) ..

The highly competent on-board DELL diagnostics reports that it’s all working fine, but working in windows it ain’t. – It’s got to the point that I can’t even be bothered to try Linux on it: especially after all that networking foul up came to light in the Spring Update. Been on the windows forums about the last windows update doing it, but I can’t figure out what’s going on here, and neither can the really helpful chaps back there either. (Out of all of the forums), they really are the most helpful with a ten out of ten rating, but with the bloody Virgin forums coming in at (minus a million). JERKS!

So faced with the intractable windows wall of – (we’re all perfect), and (we don’t have issues: so ignore). Then I have stepped backwards in time.

@ Home in the confines of my own space, and wearing nothing but my nightie: plus a nice sensible dressing-gown. 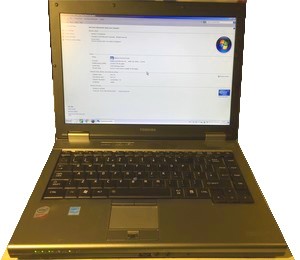 I’ve downgraded my OS to Win 7 (32 bit), on a store bought machine from eBay: that cost me a staggering (£75.00). The laptop is brilliant, but I ain’t never going back on eBay ever again.

My new computer is an old Toshiba laptop called a Terca M10.

Its got 3 Gig of ram and a 160 GB hard drive, {adequate}, and I can buy spare parts for it if an internal component breaks down. This user can even change the battery, something that’s apparently not possible in the new high end machines. The old style laptop comes complete with a sprung loaded keyboard, (and what a keyboard it is), and of course the right hand side of it has the ubiquitous [Home] [PgUp] [PgDn] and [End] keys in a row where they should be; complete with a clearly laid out cursor key cross area below them. It’s also (all) a serious writer ever really needs, and that goes double for the ancient machine’s components themselves.

Here’s an example on that bold statement: because without even denting the processor’s speed, the PC happily runs the [ Slimjet Browser ], and the [ Fossmail email client ]. Plus [ Total Commander ] for file browsing and file viewing, and of course not forgetting Word 2003, but combined with the [ Textaloud ] suite of text to speech readers that happily runs with Ivona’s voice AMY.

This laptop; even runs my [ preferred picture editor called PhotoFiltre 7 ]: that I use for designing my book covers, (without slowing it down I might add), and that was something that even kicked Win 10 in the balls now and again. – This old humble Toshiba does all this (above) in real time, and all without the buggy newer version of Windows being anywhere in sight.

Boot times of this old machine ain’t that bad either, ..

@ In the street, (wearing fuck all), as I also put myself on full display outside, and being stark naked out here is fucking cold.

The attractive naked model, [ Mega Grin! ] Is very slowly getting her fully clothed WordPress site up to speed, but it’s been hard work, (to say the bloomin’ least), and dressing the site is consuming yet more and more of my meager resources and valuable time.

[ Here ] is a link to an in depth list, and also the descriptive commented description of all the Plug-ins that I have installed on my Hosting provider.

If you took a time out to read it: then so far, (as of December the 1st 2018), then that is the state of play with me and my all consuming web site. Now all I’ve got to do is set some time aside to continue writing out my books.

Talking of which: I’ve uploaded ( Volume One ) of the Unintentional Aquanaut series.

Thanks for reading, Jessica: Praise be the ORI.

This site uses Akismet to reduce spam. Learn how your comment data is processed.

This is a local popup, .. it’s been placed here to advertise the fact that you can have your own **free** local WordPress environment, and at the click of a button.

I’m putting my own reputation on the line to push this local program, and what I can say on the subject: is quite frankly it’s brilliant. The program itself will provide you with a very simple WP environment to go local: simple but powerful.

Setting it up and running it is a breeze, but like everything else software wise out there, you do need to read the docs: just a little bit to get it running.

Did I mention that it’s free!

Try it, you won’t be disappointed.